A luxury 360-degree action camera worth the splurge

Depending on the tech circle you’re in, 360 cameras may either be the most superfluous fad or the coolest thing. I used to be in the former camp and my LG 360 Cam collected dust in a drawer for years, but over the past months, I’ve found a new appreciation for the product category. It’s partly thanks to the number of cool “tiny planet” creators I follow on Instagram, but most importantly, it’s because of a shift in my understanding of what a 360-degree camera can do.

If you think that these cams are only good for photospheres and VR, you’re missing out. Tiny planets, and the sheer number of creative ways and angles they allow, are one use case. Taking super wide angle images is another. But most appealing is the idea that a 360 cam, by definition, captures everything. Meaning you have to worry about composition in every single direction if you want a cool tiny planet, or you can be careless about angles or orientation if you’ll crop the photo (just shoot now, edit later). This is especially true for video, where you can forget about aiming or framing.

If this long intro helped you gain a new appreciation for 360 cameras, you should look at Insta360’s offerings. The company makes three consumer-grade products for Android including the plug-in Air, standalone One, and its recently announced successor, the One X. This $399 camera fixes the main issue of its predecessor, adds some nifty features, and keeps Insta360’s awesome in-app editing capabilities. If you have the budget to splurge, this is easily one of the best 360 cameras to buy right now.

Hardware, design, what’s in the box

The Insta360 One X has a small, pocketable, rectangular shape. Gone are the One’s rounded top/bottom and very curved sides. The body is larger, but flatter with smooth curves, and easier to stand upright or slip in a pocket.

There’s a wide-angle lens on each side to capture those 360s, plus an LED indicator and microphone holes (three total). The front has two buttons and a small display. That combination lets you not only turn the camera and switch between photos and videos, but also get full control over every setting, change modes and resolutions, and check the battery life.

One side has the Micro-USB port, which serves double duty for charging and wired data transfers. The lack of USB-C is annoying, but I still have plenty of MicroUSB cables everywhere that it’s not yet an issue for me. The other side has the removable battery compartment. Insta360 sells replacement batteries — handy if you’re planning a long shooting session.

The top houses the speaker for audio cues, whereas the bottom has the MicroSD slot and a standard tripod screw hole. The camera supports cards up to 128GB, a vast improvement over the limited internal storage of some competitors (looking at you, Ricoh).

The One X ships with one battery, a USB to Micro-USB cable for charging/transfer to computers, three Micro-USB cables for transfer to phones (Lighting, USB-C, MicroUSB), a rope for Bullet Time videos (we’ll get to those later), and a snug carry pouch with a neck lanyard. No MicroSD card is provided in the base package, so you should get one separately. 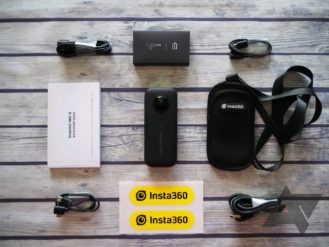 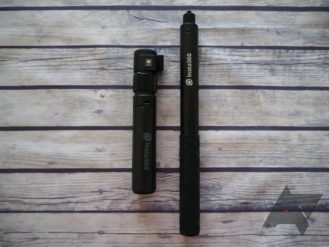 Software is a huge part of Insta360’s appeal, and the One X’s app is no different. It includes tons of manual shooting, editing, and exporting options.

Whether connected to your phone over Wi-Fi or the included cable, you can use the app as a controller to take photos and videos, view, and import what you’ve already shot. The app also lets you livestream 360 video, but only over a wired connection.

Any time you connect, the photos you’ve already taken are immediately copied over to your phone, but videos aren’t (they may take up a lot of storage). You can download them one by one or in a batch. The app organizes your media thumbnails by storage location (phone/camera), type (photo/video/Bullet Time), and date taken. Little indicators for HDR and RAW content are also included. Navigating these is very easy, though I wish we could change the default thumbnail view from perspective view to tiny planets. That would make it easier to spot which shots are worth exporting in that angle. 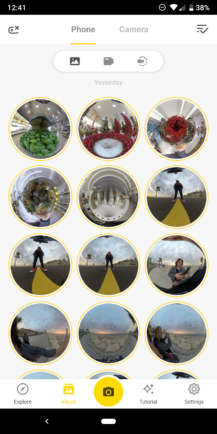 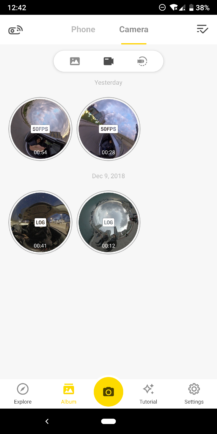 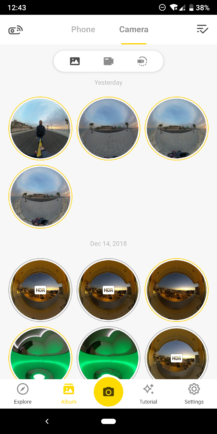 Insta360’s strength lies in what it easily allows you to do with your captured media, without having to resort to third-party software or a computer.

For photos, there are five “beautify” levels that smooth out the skin, nine filters, plenty of stickers, four view modes (Perspective, Fisheye, Tiny Planet, and Crystal Ball), and many ways to export. Those include the Insta360 community, WhatsApp, Instagram, YouTube, a link, or saving locally. I use the latter the most because I can then do whatever I want with that photo. But even there, you have dozens of ways: a static image, a 360-deg photo, and a Spin View video.

For videos, many of the same options are there (beautify, filters, export locations), but you can also trim, add music, speed up and slow down, as well as add pivot points (change the direction of the video) and smart track persons or objects. These are powerful editing options that would normally require a computer, but are easily accessible on your phone. Videos can be exported locally as fixed frames (with whatever editing angles and features you chose) and the original 360 video. 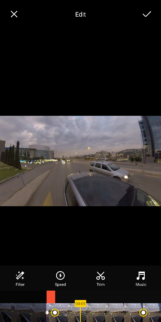 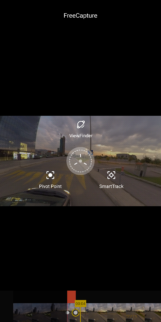 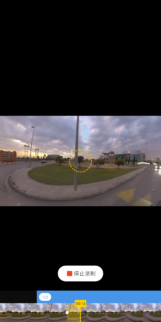 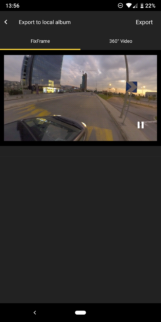 Insta360 can also capture “Bullet Time” videos, where you spin the camera with a rope or Insta360’s special handle, and the video focuses on you being the center point. Think of that famous Matrix bullet scene and it’s somewhat similar. These also offer options for speeding up and trimming, plus exporting. 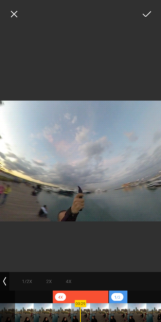 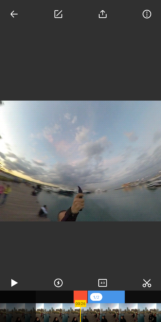 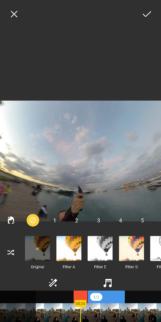 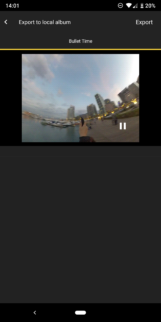 Those features satisfy almost every use case for 360 photos and videos. However, one issue remains true no matter the media type. Insta360 uses a proprietary format to save photos (.insp) and videos (.insv). It timestamps and geotags (when possible) everything correctly in the app. But when exported to any other format, your media gets the timestamp and geolocation of when/where you exported it — sometimes even defaulting to an airport in China. That’s just wrong and Insta360 should fix it. Most of my photos and videos have the incorrect date and location.

There are a few other things that need to be addressed in the One X’s app for a smoother experience:

All of the features in the world wouldn’t mean a thing if a camera can’t get you good images. Thankfully, that’s not the case with the One X. I’ve found its results to be very satisfying, whether indoors, outdoors, or in low-light. In Auto mode, colors are well balanced, sharp, and detailed. (Just keep in mind that even though an 18MP resolution seems high, it’s being divided over all directions and not just one as with regular cams.) If you like tinkering with exposure and shutter speed, you’ll love the results you can get here, and there’s always the RAW mode if you’d like to process the photos later.

HDR images were a little disappointing though. You’ll need to stay super still if you don’t want any blurriness in the resulting photo. There are also some artifacts in the merging of the different exposures, and a tendency to overexpose the final result. Nothing that can’t be fixed with a firmware update, but keep it in mind for now. I made the mistake of taking all my pics in HDR one day, and most of those aren’t usable. 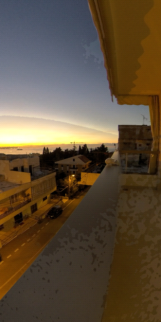 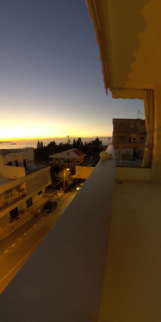 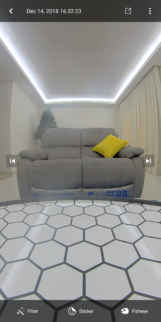 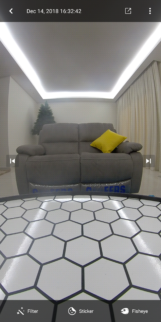 Two photos, each taken with HDR (left), without (right). Check the artifacts and over-exposure.

While you can see two full 360 samples above, I’ve also exported some pics in various other ways to show off what the Insta360 app can do. All of these were not edited, they’re coming straight off the app. 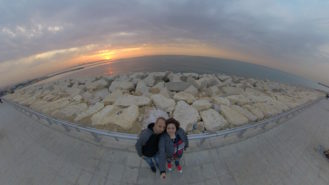 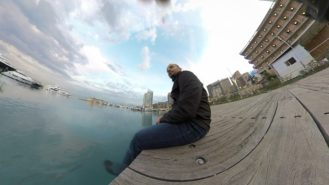 Next up, some Instagrammable 1:1 tiny planets in various conditions.

And finally, two Spin View exports, one in 1:1 where my face completely ruins an otherwise cool shot, and the other in 16:9 where you can see the cool drone-like result when the selfie stick is invisible.

The main benefit of shooting a 360 video is that you can edit later to pick any angle you want to point at. Couple this with the One X’s stabilization and the app’s many editing options, and you can get cool videos like this one if you’re the adventurous type. My samples are a little more dull though, especially now that fall is in full swing here.

Next is a 360 video exported as fixed frame. It shows off the result of changing vantage points, adding pivots, speeding up and slowing down, and smart tracking objects (a tree while taking the turn).

Bullet Times are one of Insta360’s signature features, though I personally don’t imagine capturing them often. Whether with the included rope or the separate dedicated handle, you’ll look like a fool swinging a cam around, but the results are cool.

Should you buy it?

Yes, if you can afford it. 360 cameras are a luxury, but if you travel semi-frequently, want to explore other angles and ideas in your photography, or simply like taking photos and can splurge on the cool factor, the One X is one of the best all-around options in this slightly high-end personal 360 camera market. The removal of the selfie stick alone is a mystical feature that makes me smile each time I see the result. It looks like you have a drone or someone else taking the photo/video. 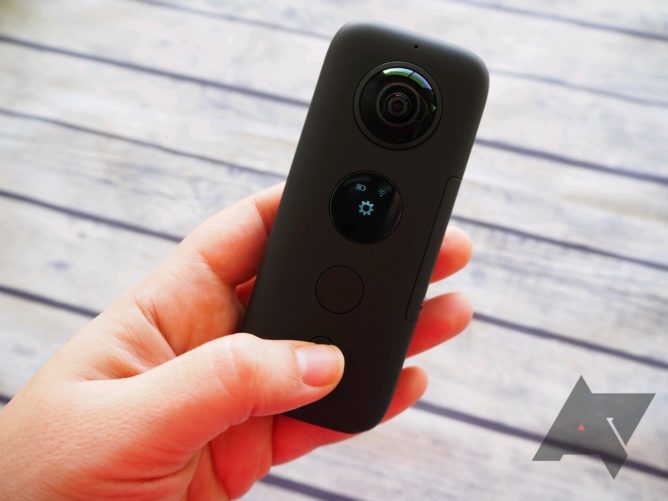 Compared to the similarly-priced Ricoh Theta V, you get higher-resolution video and photos, more storage (MicroSD vs 19GB), a removable battery, on-device controls without a phone, and a wired connection to quickly transfer media to your phone. Compared to other brands, it still comes out on top: the GoPro Fusion is waterproof but more expensive and its software hasn’t been well-received, the Garmin Virb 360 suffers from the same disadvantages but is even worse off, the Rylo 360 has a similar spec sheet but is also pricier, and other sub-$400 cameras omit many features, thus targeting a different audience. For example, the Xiaomi Mijia 360 is excellent for photography, but not as good with video.

The One X even wins against its cheaper predecessor, the $300 One. I spent several months with the latter, took it all around Lebanon and Nepal, shot awesome photos/videos, but I kept complaining about the tedious Android adapter I had to carry around. The One X is much, much easier to connect to my phone both wirelessly and with the cable. I also love the new buttons+display combo to change modes and settings on the fly. When I’m short on time, the last thing I want to do is get my phone out, open the app, connect, then change a setting/mode. Now I just press a few buttons and boom, I can take the shot I want. Add the One X app’s ability to batch download videos to the phone, plus the new 5.7K video resolution, and you have all the reasons to pay the additional $100 for the One X. 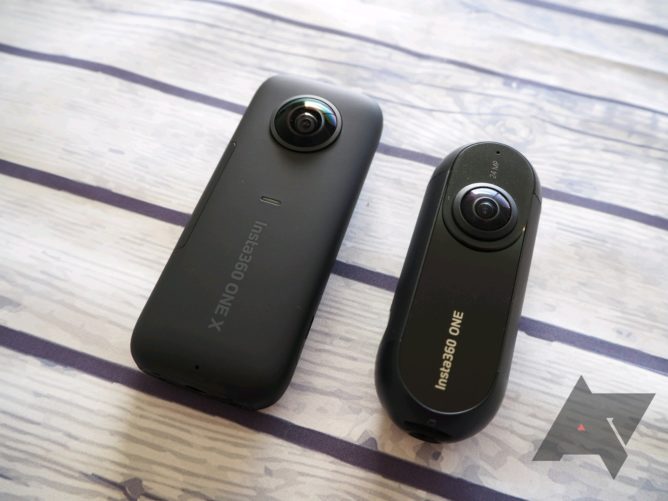 There are still a few things that I wish could be fixed, especially in the One X’s app, but those shortcomings aren’t deal-breakers. Just beware of the HDR processing, and the timestamp/geotag issue when exporting, and you’re good.