We’ve all been late to an upcoming meeting, especially when running from one Google Meet call to the next. Common courtesy is to let people know you’re going to be late, but this should be as easy as possible, especially when you’re already short on time. Google Workspace introduced a feature a few months ago that made it convenient to chat with people with whom you’re about to meet, and with its latest update, it’s even easier to reach out to groups.

Google Chat now automatically shows a shortcut to chat with the person you have a meeting with. The suggestion appears at the top of the Chat section in Gmail and in Google Chat. The shortcut to the 1:1 discussion will appear ten minutes before the meeting starts and persist for the next ten minutes after the appointment ends.

This new feature makes it easier to let people know you’re late or to confirm actions after a meeting. It started rolling out to all Google Workspace users, except Workspace Essentials customers or users with personal Google Accounts, who won’t benefit from this enhancement.

Three months after Google initially launched automatic suggested conversations, it’s making the feature even better. If you’re planning to meet with multiple people, you’ll be able to start a new group chat with everyone involved. Suggestions follow the same rules as 1:1 discussions, appearing ten minutes before the meeting starts at the top of the Chat section. 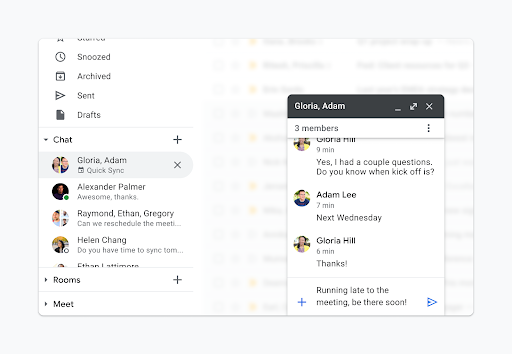 Group suggestions are on an extended rollout release, which means it could take more than two weeks before the feature shows up. It’s available to all Workspace customers, in addition to G Suite Basic and Business users.