Two Point Hospital charmed us when it launched in 2018, but there was certainly room for improvement. However, three years and 20 free updates later, the hospital-management sim is in much better shape than it was at launch. Still, Two Point Studios wanted to improve upon that formula with its next entry in the Two Point County series, Two Point Campus.

As leaked last month, Two Point Campus puts you in charge as you build your university the way you want. Improving upon the toolset present in Two Point Hospital, the studio wants to give players more control over how they create the college of their dreams. For the first time, players can craft exterior buildings, no longer restricted to the game’s layouts. You can even place trees, custom pathways, change ground types, and more with just a few clicks. You can even build dorms to give everyone their own room, or cram as many beds into a single room as possible to save money at the expense of student happiness (more on that later).

“We want to give more of that control over to the players,” senior U.I. designer Lauren Woodroffe says. “We have so many different kinds of players. We have players who maybe don’t necessarily want to engage with a really, really deep simulation but really enjoy the creative side. Or we can also have our players who really want to get in depth and change the price of a cheesy gubbins and hire the best staff. We want to make sure that everyone can have a great time.”

As you delve into the game, you’re given control over how you approach the creation of your campus. Though objectives appear in the corner of the screen, you can tackle them at your own pace, and in an order of your choosing. This curated sandbox approach is meant more to guide players towards the fun, but you don’t necessarily have to make them your top priority if you don’t want to. 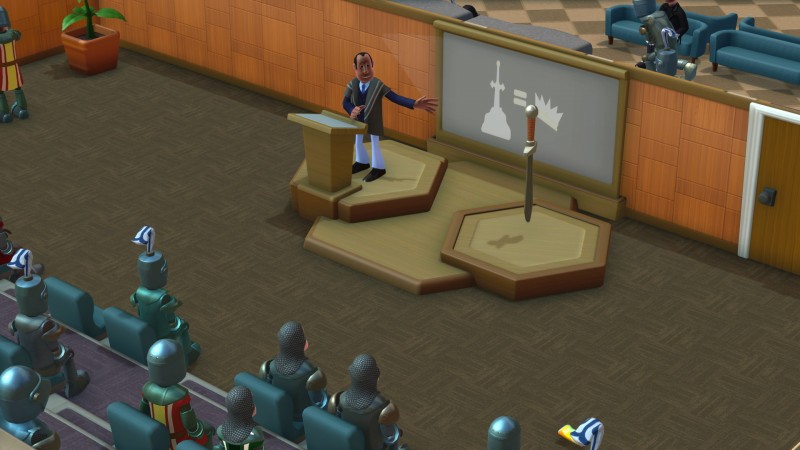 Of course, it wouldn’t be a Two Point game without the studio’s pun-heavy humor. The team promises even more humorous elements playing into the experience of attending college. On top of that, the courses offered are hardly conventional, as judging from the trailer and gameplay footage I viewed, the students will be able to take on coursework involving cooking giant pizzas, learning how to be a lance-wielding knight, and obtaining wizard-like magic powers.

Speaking of the students, Two Point Campus uses the (hopefully) four-year format of college to allow you to get to know your students (AKA your customers) better. Each student has unique personality traits, wants, and needs, and it’s up to you to keep them satisfied not only with the courses on offer, but through an engaging campus life. By introducing new clubs, societies, and gigs, you can allow your students to surround themselves with friends, develop relationships, and other things that make them more likely to enjoy their time at your school, and thus, become more likely to stay all four years. 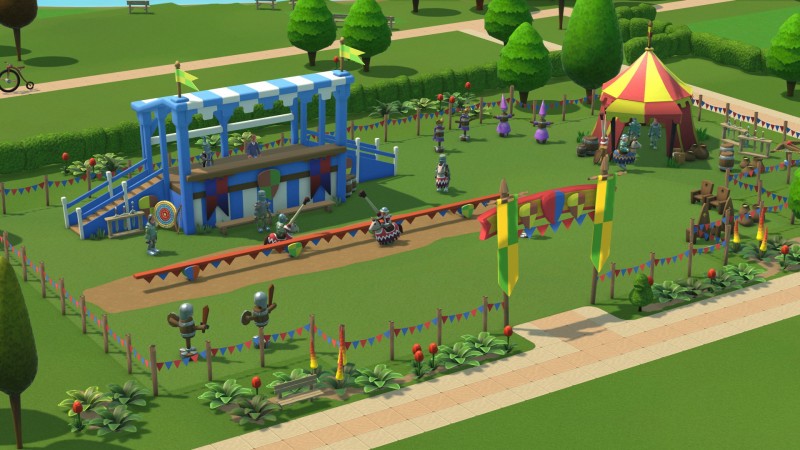 “[Character interaction] was in Hospital to some degree, but you never really got to see it because, generally speaking, the only people that spend longer together would be the staff, and that’s only if they were in the staff room together usually because they all have their own clinics,” studio director Gary Carr says. “What we want to do is expose that more so we have a situation where people are in dorms together, people are in group activities together, so you start to see those that don’t get on very well, those that are actually probably romantically inclined with each other, those that actually have some shared interest and join a society together and become buddies on a sports team. What you’re doing is slightly shepherding these activities in a positive way.” 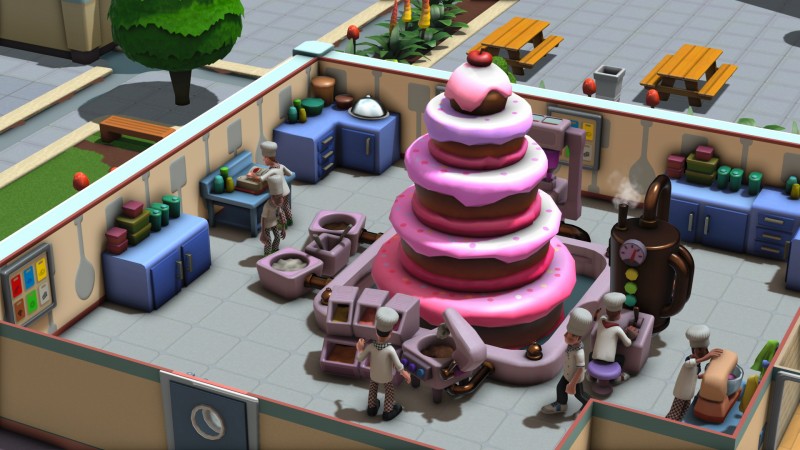 However, despite this lore and location interconnectivity, there is no actual integration between the games … at least not yet. “Our goal is to eventually connect these in a much more powerful way,” Carr says. “It’s a journey; it’s not going to happen today. Everyone can imagine what we’d like to do: We’d like to have something happen in Two Point Campus and that means we have to be rushed off to Two Point Hospital or you have doctors that you want to train in Two Point Campus and import. We know what you want you want […] There’s a bunch of things we’re talking about, but we’re not there yet today, but it’s definitely part of our journey. We want these games to feel integrated into County. The County’s our long-term plan.”

Two Point Campus looks like a ton of silly fun layered on top of a competent and engaging college-management simulation. The studio appears to have learned several lessons from its debut outing, and I’m excited to see what other surprises Two Point Studios has in store. Those who played Two Point Hospital on console and were underwhelmed by the offerings have reason for optimism with Two Point Campus, as everything has been designed from the ground up with both controller and mouse/keyboard in mind. Two Point Campus comes to consoles and PC in 2022.