Compared to Telegram, Facebook-owned WhatsApp has been moving at a snail’s pace in shipping new features. After years of waiting, users are finally getting multi-device support — but it’s not looking nearly as comprehensive as we thought it would be.

Support will be limited to WhatsApp Web, WhatsApp Desktop, and Facebook’s smart display, Portal, at first, according to a report by WABetaInfo. If you were looking to use the same account on two Android phones or an Android and an iPhone, tough luck. 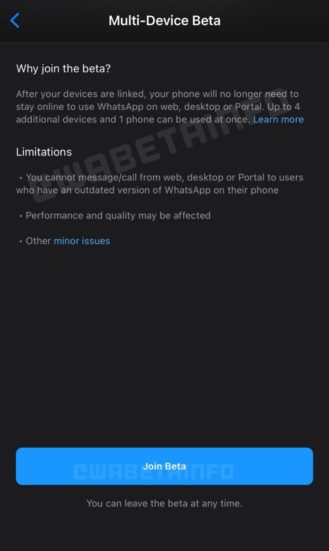 Multi-device support will finally let you text or call from devices even when your phone isn’t connected to the internet.

A screenshot appears to confirm this and clarifies that you’ll be able to use your account on four such devices in addition to a phone. The feature will first be tested in beta, and there might be certain “performance and quality” issues. You also won’t be able to send messages or make calls from the additional devices to users who have an outdated version of WhatsApp.

We’re probably still a couple of months away from multi-device support being rolled out in beta, but it could take longer. While the first version will be limited to the aforementioned clients, future updates should eventually bring support for multiple phones.